The Honey Badger is known for his beaming smile, charming personality and daring, late-breaking overtakes. He’s also partial to drinking out of shoes. But how good is Daniel Ricciardo? Could he reasonably be expected be beat someone like Hamilton in their prime? Our mathematical model has the answers. 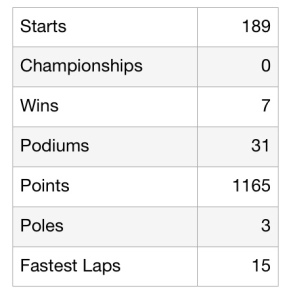 Ricciardo established himself as a top driver early on, but his obvious potential has never translated into a serious championship challenge. Nevertheless, he’s achieved several wins and is seen by many as a future world champion in the right car.

For reference, Hamilton’s average yearly ranking is 100. The model agrees with the general perception of Daniel Ricciardo: he’s perhaps not quite as good as the absolute best, but he’s not far off. Given that his level is similar to that of Nico Rosberg and Jenson Button, both of whom managed to outscore Hamilton as teammates at least once, Daniel should fear no-one. Ricciardo himself outscored the highly ranked Verstappen twice at Red Bull, although the model still considers Verstappen to be a slightly superior driver. This is partly on account of Verstappen’s inexperience in 2016, and partly due to information from additional teammate matchups. 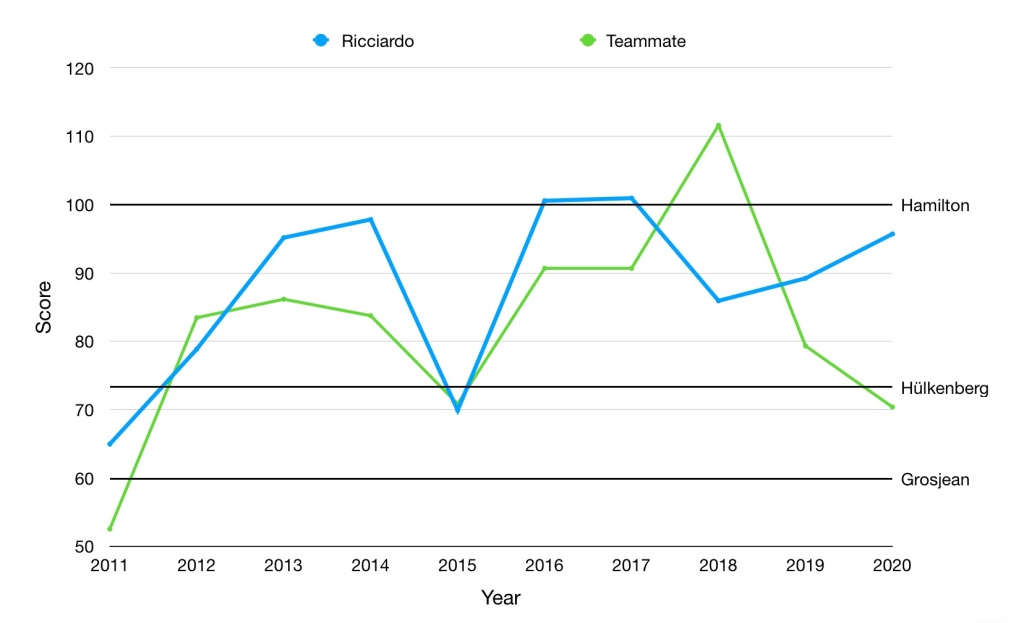 It took a few years for Ricciardo to reach his peak form, but he’s demonstrated that he’s a quality driver year after year. It’s quite normal for drivers to improve in their rookie years, particularly when they debuted mid-season like Ricciardo. Only in 2015 does the model see his form dipping significantly, and this as at least partly due to bad luck. The graph also suggests that Ricciardo’s teammates have typically had average scores between that of Hülkenberg and Hamilton, which is significantly above that of an average driver. His strong performances against Sebastian Vettel (2014) and Max Verstappen (2016-2018) reiterate the point that he could legitimately hold is own against anybody.

Ricciardo was given a drive mid-way through the 2011 season, for the back of the grid HRT team. Whilst he scored no points and the model considers this by far his worst performance, it should be noted that his score is still respectable (in-between a typical season of Grosjean and Hülkenberg). His score is also roughly what would be expected given his inexperience at the time.

In 2012-2013 he was paired against Jean-Eric Vergne. The model considers them closely matched across this period, with a slight edge to Ricciardo overall. The teammates ended up competing for the 2014 Red Bull seat, with Daniel’s superior qualifying record in particular impressing enough to secure the drive.

Vettel had won the last 4 championships when Ricciardo joined him at Red Bull. If this was a daunting challenge, it did not show, and Ricciardo quickly established himself as the quicker driver. He won 3 times and stayed in championship contention for most of the season, despite competing against a dominant Mercedes car. Many at the time reconsidered Ricciardo’s abilities after this season, whereas others suggested that Vettel was off his game due to rule changes not suiting his style. It’s a shame that we didn’t get this match-up for another year or two to properly assess who would come out on top, as the model considers the two drivers similar in ability.

In 2015 Ricciardo was paired with Kvyat, and was outscored across the season. This is a highly unlikely result ( the model outputs a bigger error for it than any other match up in the last 20 years!). There are several plausible explanations, with both bad luck and a frustrated Ricciardo both being factors. Red Bull still backed him though, and he outqualified his teammate in nearly ¾ of races. After a poor start to 2016, Kvyat was dropped from Red Bull in favour of Max Verstappen.

Verstappen established himself at Red Bull straight away, winning at his first attempt. Ricciardo felt he had been compromised by an inferior strategy (and had been running ahead of Verstappen before Max’s strategy was switched), but the perception that Max was the future of Red Bull was already developing. The two were closely matched across their 3 years together, with Ricciardo coming out on top in 2016 and 2017. Indeed these are considered to be Ricciardo’s best years, with some high quality wins in Malaysia 2016 and China 2017 being the highlights. On both occasions he got the upper hand on his teammate too.

However, Verstappen took the lions share of the points in 2018. The evidence is that Ricciardo was still delivering though. His last Red Bull win was proof of this; taking victory at Monaco despite a large power deficit for the majority of the race. In the second half of the year Ricciardo suffered from poor reliability, and this, combined with a desire to be a team leader caused him to voluntarily leave Red Bull for Renault, a team who had not secured a podium in several years.

Ricciardo was tasked with leading the Renault team to success. Although signed on only a 2 year deal, the relationship was seen as a long-term project. The team remained firmly in the midfield in 2019, and mistakes creeped into Ricciardo’s driving as frustrations grew. Before the 2020 season his faith in the team had deteriorated and he chose to leave for 2021, with an upturn in form coming too late to keep him on board. Ricciardo easily outscored his Renault teammates (Hülkenberg and Ocon) across both years, and the evidence is that he was still performing at a high level compared to the majority of the grid, even if he wasn’t quite at his absolute peak. He was ranked the 4th best driver of 2020 by the model.

Ricciardo has struggled at McLaren relative to Lando Norris.

The evidence seems to suggest that Ricciardo is best in a competitive car, and he can let frustrations come out on track if the team is not delivering. However, Ricciardo at his best is as good as anyone.